Minimal ingredients, barely any prep and almost no hands-on cooking time? Yes, please. This is one of those criminally simple dishes that somehow tends to really impress people – yay! The best part is, this beef brisket au jus reheats so well that I tend to throw it in the oven on Sunday, then rest it before putting it in the fridge to slice the next day and eat for a couple of lazy dinners throughout the week. Gotta love when you just have to put together a quick vegetable side instead of a whole meal, right? I used to find with brisket that it needed to be cooked for about an hour per pound, but grass fed beef cooks quicker as it is that much leaner, so this took about 45 minutes / lb. I used a 7 lb piece, but of course you don’t have to do so, just scale up or down accordingly. Although, if your brisket is larger than 7 lbs, you’re going to need the kind of grown up, deep roaster tray that I still don’t have in my kitchen – I had to sub in a Pyrex dish and cross my fingers it didn’t overflow 😛

So, first off, peel and slice your carrots. Next, your onions – keep these pretty chunky…

…because you’re going to want to place your brisket on top of these after you’ve patted it dry. Next, you’re going to season the top of the roast (place it fat side up!) and add your garlic cloves and rosemary branches. I added a little black pepper and smoked paprika, but you don’t have to. Please don’t salt the brisket, though, as that will just dry it out. 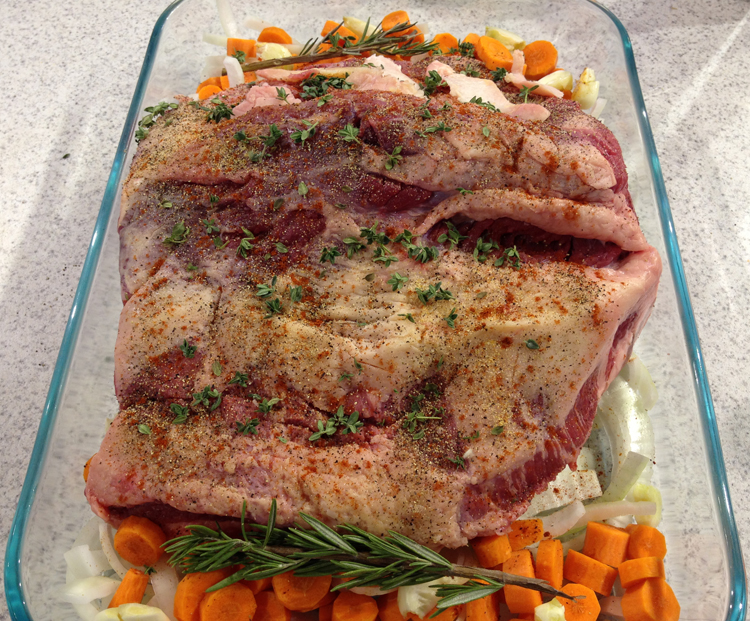 Then you’re going to put this in the oven, uncovered, at 350F for an hour. This is going to brown the top a little and start rendering down the fat. At which point, you’re going to pour your (salt free) tomato sauce over the top. This is going to help tenderize your beef while stopping it from drying out due to the acidity of the tomatoes. Not pictured, but very important!, is the fact that you’re going to need to cover the brisket at this point. I wrapped my dish in foil due to the lack of aforementioned grown up roaster pan! Turn the heat down to 325F and cook for another 4 hours.  At this point, the fat had rendered completely on my brisket and so I flipped it, re-covered it and returned it to the oven for another hour at 250F to finish up. So this totalled up to 6 hours cooking time. Again, if your brisket is smaller, you will need to cook it for a total of 45 minutes per pound, which would include the browning stage at the beginning; if your brisket is smaller than about 3 lbs, I would reduce the browning stage to 30 minutes rather than an hour.

Paradoxically, too, unlike a steak which hits inedible at an internal temperature of 160 F, brisket needs to be cooked way beyond that so called “well done” stage. It needs to get over about 190 F internally so that the collagen / connective fibers start breaking down. Otherwise it will be tough. I cooked mine to about 200 F. If you don’t have a meat thermometer, you can tell when it’s done by inserting a skewer into the meat: if it slides in easily without you having to exert any force, you should be good to go.

Now, you can rest it and then slice and serve on the same day if you want – it’s going to be delicious! To do so, you’re going to have to skim the fat from the pan juices before plating. Personally, I find it’s way easier to rest the brisket and then refrigerate it until the next day for slicing. I set aside the pan juices in a separate container so that the next day I can simply pick up the fat that has risen to the top in one piece. If you do this and want to reheat the brisket slices, place in an oven proof dish with a little extra beef stock in the poured over the slices, then cover the dish with a lid or foil and heat at 300 F for 30 – 45 minutes, depending on the size of your dish. Reheat your now de-fatted au jus on the stovetop or in the microwave and serve alongside the sliced brisket. Easy. A ridiculously simple recipe which turns a usually tough piece of meat into fork tender brisket au jus. Make at the weekend and enjoy throughout the week!

To serve the next day: