I’m sort of on a roll lately when it comes to cooking up totally impossible recipes. Like last week’s Tomato-Less Tomato Soup with Herbed Croutons. Or this nightshade free Shrimp Étouffée recipe.

Yes, really. When I first started on an elimination diet, I kept everything really, really simple for a lot of reasons, one of which was that I didn’t want to spend lots of time in the kitchen attempting to make recreations of recipes that just wouldn’t live up to what I thought of back then as “the real thing”. Especially because I just didn’t have the freaking energy. Or the money. Specialty ingredients were not remotely in my budget, nor were they available in my small town grocery stores. But as the years have gone on, things have changed for me. I’ve got more time and energy. The money situation hasn’t exactly been a bed of roses — no surprise windfalls here! — but those specialty ingredients have become much more mainstream, less expensive and even reached the non-specialty stores in this neck of the woods.

I’ve also found myself feeling more creative. More inspired. I don’t have the emotional ties I once had to food and I’ve found myself enjoying following the work and cookbooks of people who don’t eat the same way I do, instead of just feeling bummed out that I can’t eat those foods, like I used to. It’s been really freeing to be able to go outside of my own “special diets” box and find things that make me want to take on bigger challenges, in food and in life.

So, this nightshade free Shrimp Étouffée is something that just leapt into my brain a few weeks ago and I couldn’t let the idea go, even if I wasn’t really sure how to go about it. But it turned out to be pretty simple! The trick of it all was whisking up a roux, just like in a traditional étouffée recipe. Except here, I used cassava flour in place of white flour and bacon fat in place of butter. The bacon fat also adds a lovely smoky depth of flavor that really helps give this nightshade free Shrimp Étouffée its backbone. Now, although the method of making this roux is the same as usual, it doesn’t behave like a normal roux and for a while, I’ll forgive you if you’re cursing my name and wondering if I really know what I’m talking about.

See, at first, the cassava flour roux base is a wee bit weird. It foams up at the beginning, which frankly is a little freaky, and it doesn’t thicken up like you might expect it to. You will have to stir it like the dickens like a traditional roux and it will darken and deepen in color, which is what we want, but it will also look and feel noticeably gritty, so you’ll be wondering if I’m a complete idiot as you whisk it up.

However! That grittiness by no means carries into the finished dish and the cassava flour roux does exactly what it’s supposed to: it thickens everything up into that lovely unctuousness that is perfect for smotherin’ and it brings in a gorgeous deep caramel-y color as a base for this flavor filled nightshade free shrimp étouffée. 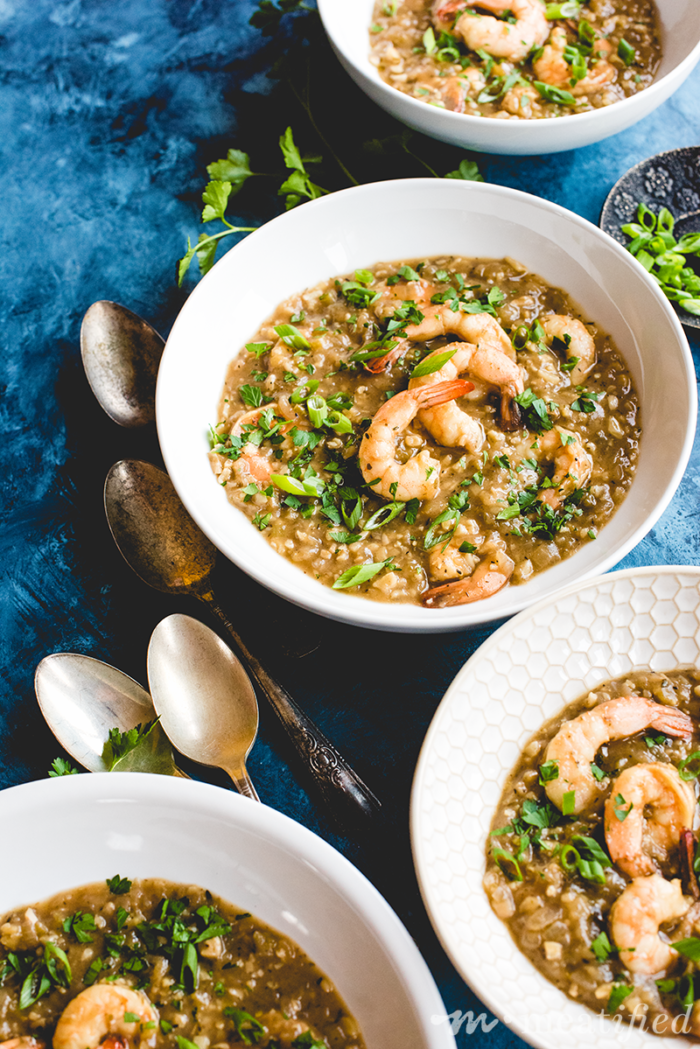 You’d think that cutting out the spices would cut down on flavor, but you’d be wrong. I’ve got traditional flavors in here like onions and celery, oregano and thyme, but I’ve also boosted up the savory goodness with a splash of coconut aminos (I like this brand and it’s much cheaper than Coconut Secret) that gives a lovely punch of umami and red wine vinegar that gives a subtle hint of acid. (I ruined my first test batch by using lemon juice instead of vinegar – it was really overwhelming in lemon flavor while oddly lacking in acidity. Don’t be like me).

Now, you could totally cook up extra cauliflower rice and serve this nightshade free Shrimp Étouffée on top, which would be pretty close to how it’s traditionally served and mightily delicious. Or, you could be like me (this time it’s a good thingg!), and save a little time by adding some riced cauliflower riiiiight into the same pot as I do in this recipe. That way, I can serve this up straight from the stove and without dirtying up another pan. That said, if you’ve got some time and extra rice to hand, that will stretch this recipe even further. Now, you could totally cook up extra cauliflower rice and serve this nightshade free Shrimp Étouffée on top, which would be pretty close to how it’s traditionally served and mightily delicious. Or, you could be like me, and save a little time by adding some riced cauliflower riiiiight into the same pot as I do in this recipe. That way, I can serve this up straight from the stove and without dirtying up another pan. That said, if you’ve got some time and extra rice to hand, that will stretch this recipe even further. Totally up to you!