Butternut squash is definitely something I didn’t appreciate until I was a fully grown human with a kitchen of my own.

Actually, that’s true of winter squash in general. It wasn’t something I’d ever seen as a child and fit firmly into the category of “healthy food my friend’s mom makes at her house” as a teenager. Fast forward to my early adult years and I had no clue about how to chop, prepare or eat the stuff, really. 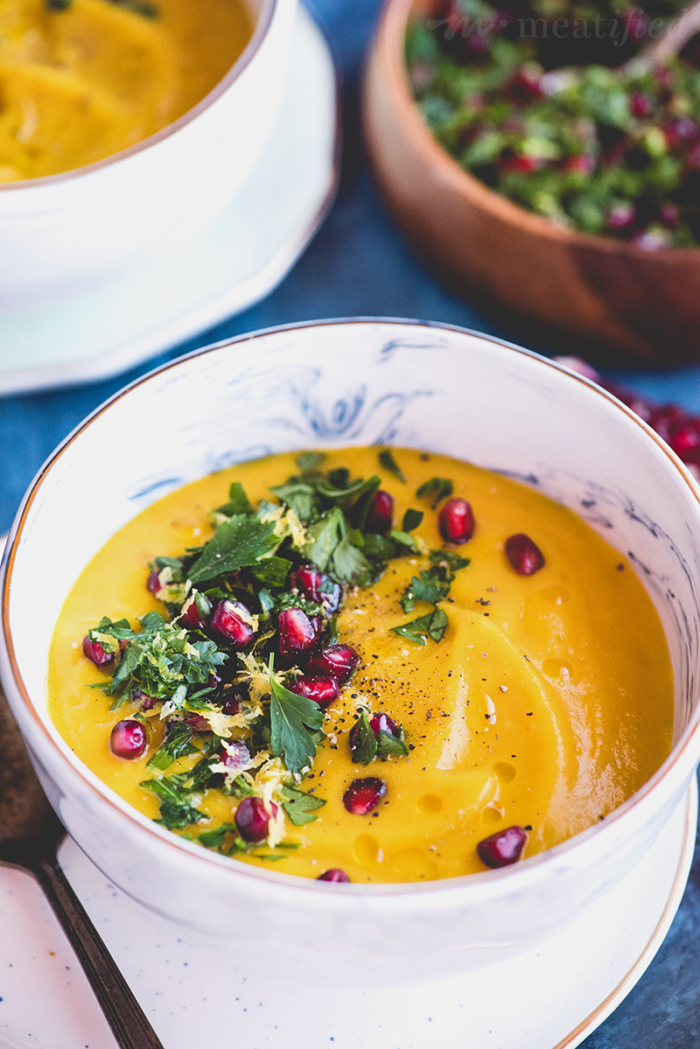 For a long time, I always assumed that the outer skin of a butternut was super tough and difficult to cut, akin to something like a much thicker skinned acorn or kabocha squash. So I always bought ready-prepped butternut on the odd few occasions when I was making something butternutty, for fear of having to bust out the cleaver and maybe losing a few digits. (Anyone else completely, irrationally paranoid about cleavers?!)

So imagine how much I laughed at myself when I finally figured out that all you gotta do with these suckers is… peel ’em. With — surprise! — a good old fashioned vegetable peeler. (I like this style of vegetable peeler the bestest). If you’ve never peeled & chopped up your own butternut, this post is super helpful! Now, there’s nothing wrong with buying ready-prepped butternut, but it costs more than some proteins per pound and doesn’t last very long before turning to mush.

Conversely, a whole butternut can sit around in your kitchen for most of the winter and be just fine when you’re ready to cut that sucker up, so don’t be intimidated to chop your own like I was for so long! This butternut apple sounds and looks all kinds of fancy, but it’s actually pretty simple and hands off. First you toss chunks of butternut along with unpeeled apples, hunks of onion and whole garlic cloves in a little oil and shower them with a light seasoning. Those baking trays full of fruit and vegetables hang out in a roasty-toasty oven for 30 minutes to reduce and caramelize, concentrating their autumn-heavy flavors.

This makes for a much richer sweetness from the apples and squash than just a standard veggies-meet-broth approach to soup.

Of course, you can’t make this butternut apple soup without bringing in the broth eventually! Once everything has come out of the oven, all those lovely veggies (and a token fruit) get transferred into a Dutch oven to simmer a while with some homemade broth.

Here’s where I switch things up a little, skipping the usual cinnamon or pumpkin spice based seasonings for a punch of fresh ginger and a dash of obnoxiously hued turmeric. This way, you’ve got a hint of spice against the squash-y sweetness, some of my favorite inflammation busting ingredients and a turbo boosted shot of sunshine in a bowl. Right now, the last few pomegranates of the season are barely lingering on the shelves and I wanted to serve this butternut apple soup up with a pop of color and some contrasting texture. So I decided to whip up a quick pomegranate gremolata to spoon on top for a little added pizazz. Gremolata sounds like you’ve gotta have your pinkies out, but it’s really just a fancy way of describing a herb-y condiment that’s usually made with fresh lemon zest and garlic.

Adding fruit to a gremolata isn’t traditional, as far as I’m aware, but the pomegranate arils add a lovely burst of tartness and crunch that contrasts so very well against the creamy butternut apple soup.

The fresh parsley, garlic and lemon also brighten up what can be a heavy, starchy soup, reminding you that it’s not gonna be winter forever! You can make the soup in stages or in advance — it keeps well in the fridge for about 5 days or so and in the freezer for at least 3 months. I recommend making the pomegranate gremolata just before serving. Traditionally, an Italian gremolata is made with very finely minced herbs, but here you can see that I’ve left the flat leaf parsley a little more rough and rustic. It’s totally up to you!

Make sure to use the freshest garlic you can, since you’re eating it raw here. Older, more musty or bitter garlic is just gonna mess things up.

If you want to make things look even more gussied up, you can gild the lily and add finishing touch or two. If you want your soup to be a little more decadent, a swirl of coconut cream makes things extra silky. A drizzle of extra virgin olive oil or – even better! – lemon infused olive oil makes things a little fancier, too. Now that I’m doing better with fruit & seed based spices, I also like a good generous grind or two of mixed peppercorns, but you’ll want to skip that for the elimination phase of the AIP. One last thing: ground turmeric stains the hell out of a Vitamix pitcher. I only just discovered this, because I’ve only recently swapped over to a Vitamix from my old-and-trusty inexpensive Ninja blender. For whatever reason, I could leave turmeric spiked soups or smoothies in the Ninja for ages without staining. But the Vitamix pitcher stains like a mofo in minutes. So you can either blend up the soup right in the Dutch oven with an immersion blender, OR blend the soup together without the turmeric in the Vitamix. Then you’ll have to return the soup to the pan, add the ground turmeric and give it a a good stir until the soup combines nicely. For the butternut apple soup:

For the pomegranate gremolata: