I’ve talked a little bit about it before, but I originally came around to the Paleo way of eating because I wanted to find a way to manage my autoimmune disease, Hashimoto’s. Despite years of thyroid replacement therapy and being told everything was “fine” — I wasn’t fine at all. It’s just that no one could see what was wrong and so many of my symptoms meant nothing in isolation.

Paleo has improved my symptoms drastically — but I’m always looking for ways to further tweak and improve on my health. And that’s where the Autoimmune Protocol comes in. Essentially, AIP is an elimination diet where all possible dietary sources of inflammation are removed (you can read more about what that entails here). The Autoimmune Paleo Protocol can have some amazing results: but it can also be extremely intimidating! It’s Paleo on steroids: no eggs, no nuts, no seeds, no nightshades… and then to add insult to injury… no nightshade or seed derived spices. PHOOEY.

I have my own Autoimmune Protocol category of recipes and posts here on meatified, which you can find here. But today I’ve gathered together a bunch of my favorite Autoimmune Protocol friendly resources for you here – everything from the science behind AIP to easy, delicious compliant recipes. So if you’re new to AIP or just want a little foodie inspiration, I’ve got you covered! Ok, I had to share this one first. I’m a little biased 😉

Nourish is my book baby and I happen to think she’s rather beautiful. If you’re looking for family friendly, approachable food on the AIP, I think you’ll like Nourish, too. To see more book details and some sneak peek photo previews, visit this page! 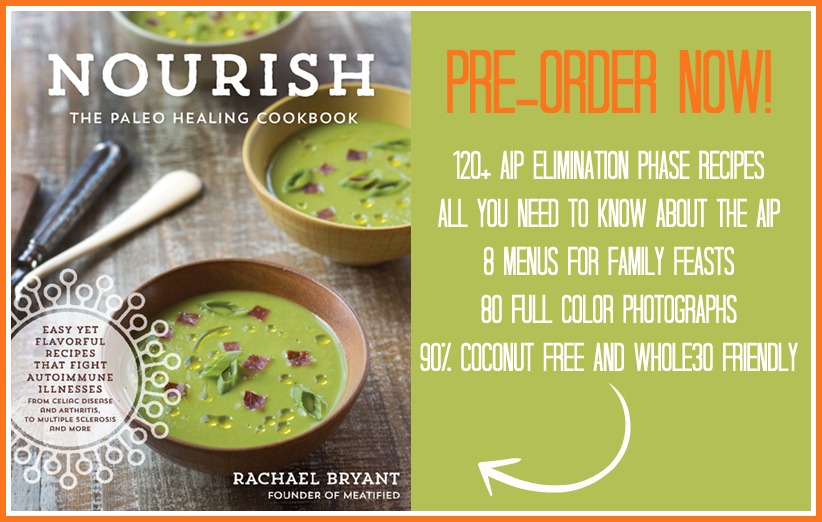 And here are some of my other absolute favorites…

It Starts With Food: This New York Times Bestselling book is the template for a 30 day program called the Whole30. You can read more about what exactly a Whole30 is here. Chapter 21 of It Starts with Food specifically covers how to complete a successful Whole30 while also following the Autoimmune Protocol.

The Autoimmune Paleo Cookbook: This is the first Autoimmune Protocol cookbook ever to be printed! Not only is it packed full of ridiculously easy and delicious recipes, but it’s also got extra resources like meal plans and shopping lists. You can also check out the earlier ebook version here.

Reintroducing Foods on the Paleo AIP: This is a fantastic guide to what happens after the elimination phase of the AIP – and how to go through the process the right way. Read my review here.

A Clean Plate: Christina’s site is a treasure trove of delicious recipes that prove that a restricted or adapted diet doesn’t have to mean being deprived of food that is both pleasurable and nutritious!

Alternative Autoimmune: This site is run by a health coach, which means it has all kinds of juicy information on the Autoimmune Protocol and living with Autoimmune challenges, in addition to some tasty recipes. I especially like Angie’s adaptations of traditional holiday menus like Christmas and Thanksgiving.

Chowstalker: This Paleo recipe sharing site has its own Autoimmune Protocol category – it’s a great place to go to get inspired about what you CAN eat!

Gutsy By Nature: Not everything here is AIP, but all the recipes are clearly marked when they are suitable. Jaime is using Paleo to heal her Crohn’s disease and you can read more about her here.

La Chica Paleo: This site is packed with AIP recipes, articles and all around good things… and it’s written entirely in Spanish!

My Big Fat Grain Free Life: If a self confessed “gluten loving Italian” can go grain free without throwing in the towel and yelling “Fugettaboutit!”, then there’s hope for the rest of us! Jen has great approachable recipes and shares her AIP journey honestly & openly.

Phoenix Helix: Eileen is quite the AIP Authority! She writes about all aspects of living while following the Autoimmune Protocol and she’s also the Autoimmune Ambassador over on Chowstalker! She hosts the weekly AIP Recipe Roundtable at her site, so you should definitely check that out for inspiration.

The Paleo Mom: Sarah has only ended up at the bottom of this list because it’s in alphabetical order! She’s a powerhouse of knowledge about the Autoimmune Protocol and makes the science behind it accessible and understandable: that’s no mean feat! She’s also the author of the definitive guide to the Autoimmune Protocol – her newly released book The Paleo Approach (and the soon-to-be-released companion cookbook, The Paleo Approach Cookbook).

What are your favorite Autoimmune Protocol resources? Please feel free to share them in the comments below!