The new year is impending and apparently that means lettuce-recipes are incoming. But if my new year doesn’t include some fried foods then I’m going to go on time-strike and start counting backwards. Kind of like I do for my birthdays. Anyway.

Really this is a story about some leftover sweet potatoes. Wicked stepmother Meatified bought too many, cooked too many and then locked the unwanted tubers in the cruel confines of a super cold box for several days without even bothering to check on their welfare. But have no fear! Those fair things were soon to be rescued by the dashing Mr Meatified who glared at Mrs M and demanded to know why such sweet taters had been treated so cruelly and for so long. Thus, evil stepmother had no choice but to slink back into the kitchen and to seek a more fitting end for the aforementioned sweets. Yes, I clearly need my Once Upon A Time fix.

Ahem. So I battled through the rather lackluster post-holiday contents of my fridge and found some leftover – undressed – coleslaw I’d made a few days before. I don’t even like coleslaw so I have no idea what I was thinking with that one. Adding broccoli did not save it. I still hate coleslaw.  Thus, the Cabbage Cake was born!

These are a little like the British Bubble n Squeak or Irish Colcannon.  It would be quicker and easier to make these in that one pan kind of style, but I went all fancy and made individual patties: this way, they can be used as a cute little base for a ton of different meal ideas. They’re just as good for breakfast with some eggs as they are at dinner topped with a burger. What’s really great about these is the texture – they’re crisp on the outside, the sweet potato makes them nice and fluffy in the middle but they also have the crunch of the vegetables inside them. Way more interesting than a latke. Although CLEARLY I love those, too.

Get yourself a bowl large enough for all of your ingredients. First beat the eggs and add the flours. Whisk the flours into the egg. This will have lumps and that’s ok! Stir in the mashed sweet potato, also adding the cilantro, garlic and any other seasonings to taste. Throw in the shredded vegetable(s) of your choice and stir until they are evenly distributed through the sweet potato mixture. Split the mixture into four and form them into rounded patties with your hands. The mixture will be wet but that’s ok, too. Now get out a large flat bottomed pan and add a generous amount of oil, whatever you like. But not olive oil. ‘Cause that doesn’t jive for frying. Heat up the pan to a low/medium (my burner was set to 4/10) and wait for the oil to warm up, too. The oil is hot enough when you can see little bubbles forming around the handle of a wooden spoon dipped into the pan, like this: Now carefully place the patties into the pan, spaced out evenly, don’t drop them because we don’t like flying hot oil. Use a large flat spatula or slice to flatten the patties down to about a half inch thick. Don’t press them bigger than your spatula or slice as that will make them difficult to flip. Cook until nicely browned, about 3 – 5 minutes depending on your stove. Flip the patties carefully. They are still soft in the middle which makes them both very delicious but also a little tricky to flip sometimes. If you’ve made any kind of protein pancake, you’ll know what I mean, although these hold together a little better than my pancakes ever have! 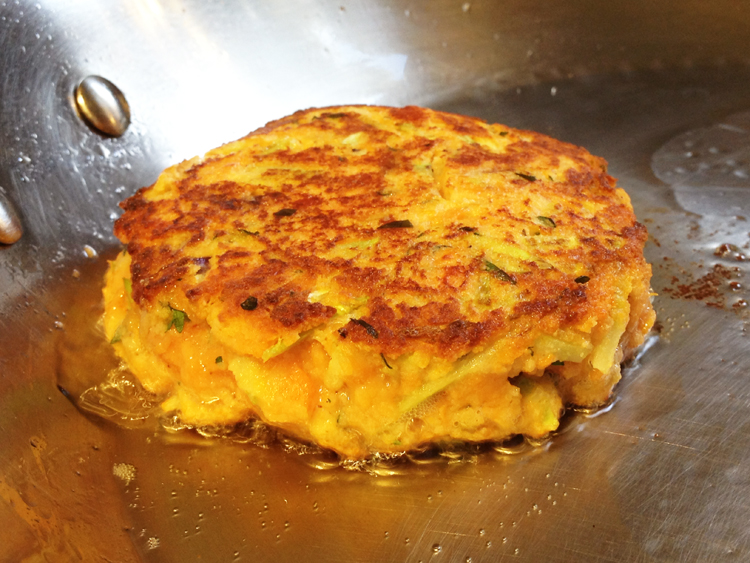 Once flipped, cook the second side until also browned. That’s it! Should take about 8 – 10 minutes total cooking time. Combining leftover sweet potato and cabbage, these cabbage cakes are a play on the traditional “bubble and squeak” and are a great way to use up leftovers!