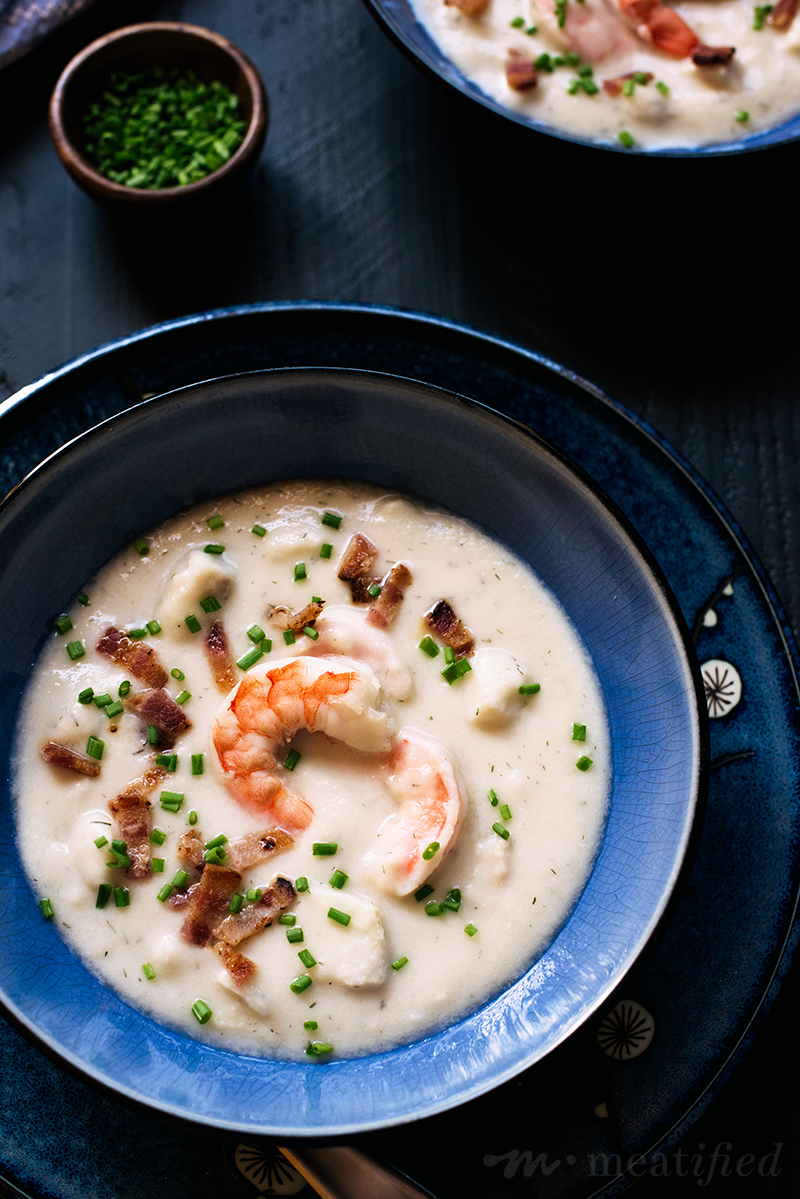 I will freely admit that I am one of those people who can eat hot soup all-year-round. But before you’re all like, “but Raaaaaach, who wants to eat shrimp chowder in Juuuuuuune?!”, hear me out: this soup tastes just as good chilled as it does when you first take it off the stove. This soup is dairy free, but has a lovely decadently creamy texture thanks to some sneaky hidden veggies and yet is surprisingly refreshing when served chilled. There’s just something wonderful about the contrast between the smooth soup and the crisp bites of shrimp.

A little side note: you may have noticed I’ve been a little quiet around here lately. Well, the thing is, I’ve been giving myself a little crash course in photography again while working on a bunch of recipe development and another side project. Fun fact: I shot all of Nourish: The Paleo Healing Cookbook on an inexpensive crop frame Canon camera that I, umm, liberated from my husband’s possession, shall we say. Since then, I’ve been saving my pennies and am supremely grateful to have been able to treat myself to a brand new Nikon D810 full frame camera and a lovely 50 mm f/1.4 lens — and I’ve had to get used to switching from one system to another, as well as spend some time learning some new tricks that I couldn’t pull off on my old camera! So you’ll notice a lot of new recipes soon… and a slightly different photography style, like the really fun dark and moody shots in this post! Now if you’re going to be a real purist, you’d want to make this soup with a seafood broth base. That said, I don’t tend to have 5 cups of the stuff stashed in my freezer. Nor have I had any luck finding an AIP friendly store brand yet. In fact, the last time I picked up a box at the store, I got it home and realized it had tomatoes, bell peppers and black pepper in it. That’ll teach me a lesson in not reading my labels! I have found an easy alternative, though: I’ll use mostly chicken broth, since I always have plenty of it, and add a cup of clam juice. This gives a little more of a seafood flavor than just straight chicken broth, since clam juice is… well… let’s go with “more fragrant” than the average seafood stock. Just look for a brand where the ingredients are clam liquor and salt – you can usually find it in jars near the canned seafood. This cod and shrimp chowder is delicious on its own… but if you want to go a little overboard like I did, try serving it with a sprinkle of bacon bits and some chopped chives! SOFTEN: Roughly chop the cauliflower into florets, then peel and trim the parsnips. Slice the parsnips into coins and smash the garlic cloves to remove and discard the outer skin. Add the cauliflower, parsnips, garlic, diced onion, seafood stock (or chicken stock & clam juice) and salt to a large dutch oven over medium heat.

BLEND: Bring the stock to an even simmer and continue to cook until the vegetables are fork tender, about 20 – 25 minutes. Remove the dutch oven from the heat and – if using – add the coconut milk. Use an immersion blender to carefully puree the soup until it is smooth and creamy in texture.

SIMMER: Stir in the dried dill and return the pan to the stove top, bringing it to a gentle simmer once again. Cut the cod fillet into bite sized pieces and add them to the soup, along with the shrimp. Cook until the shrimp are pink and the cod is opaque, another 2 – 3 minutes. Serve immediately or chill overnight in the fridge for a refreshing cold version!