If you follow me on Facebook, you’ll already know that I’ve undertaken an Autoimmune Protocl version of the Whole30. With my usual lack of forward planning, it actually ends the day after Thanksgiving. Whoops. Honestly, I actually thought it would be pretty easy. I don’t eat too many treats, I’m not crazy dependent on dairy or sugar – what could be the big deal? Uh, that’s what I thought. Until yesterday when I had an energy crash so bad I had to restrain myself from crawling to bed at 3pm. Oy. I’m not sure what my body is recovering from, but it’s clearly pretty mad at me about something. 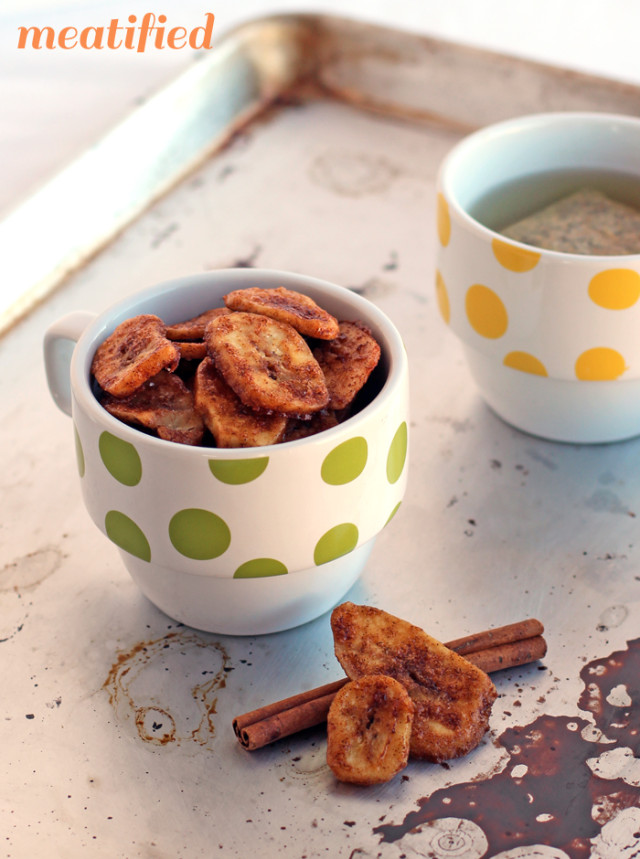 Aside from missing nightshades something fierce – Mr Meatified had to pry the last jar of salsa from my hands – the only thing that is really driving me a little nuts (ha!) is the lack of CRUNCHY things. I mean, sure, cucumbers and carrot sticks have their place. But without my raw peppers to dip in my paleo hummus or grain free granola as my weekend treat, I’m beginning to want to really CHOMP on something. That’s when I remembered: unsweetened banana chips!

I’m not going to lie to you, unsweetened banana chips on their own taste like precisely nothing. Crispy-crunchy nothing. I’m stuck eating them because the Whole30 forbids added sugar of any kind. And they kind of helped. But then I got to thinking: surely I could make these tastier?

Bizarrely, cooking something up in the kitchen – even if I can’t eat it – is really therapeutic to me. I like the distraction, the challenge and the fun of just mixing stuff up and seeing what happens. For example: would already dried unsweetened banana chips make it through a second round of cooking? I had to find out!

When I was making these Cinnamon Baked Banana Chips, I was thinking about people who are on the Autoimmune Protocol protocol long term. People for whom nuts and seeds – those Paleo purveyors of crispedy crunchiness – are perpetually out. So I figured: why not flavor up these unsweetened banana chips so that they are both crunchy AND tasty? 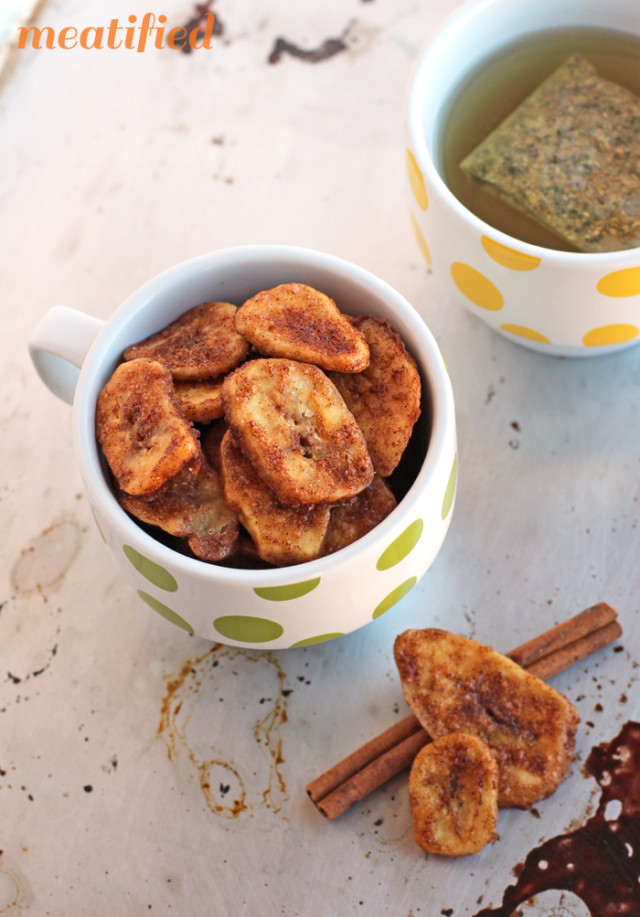 So that’s what I did! I tossed the unsweetened banana chips with a little melted mixture of coconut oil, maple syrup and cinnamon. Then I spread them out on a baking tray and, well, baked them again! Now you lovely Autoimmune Protocol followers can enjoy some nut-like crunch, without the nuts AND with a hint of maple and cinnamon. You’re welcome!

Since these do contain added sugar from maple syrup, these are going to be an occasional treat. But for a crispy crunchy cinnamon snack, look no further!

For people asking about using your own dehydrated banana chips

Yes, I’m sure you can use them. But they won’t come CLOSE to achieving the crunchy texture that makes my recipe awesome. Why? Because the way in which these unsweetened banana chips are made – dried super fast – is what makes them crunchy. Homemade versions are much, much softer. So if you’re after just the cinnamon flavor, then sub in your own chips. But if you want the crunch, I recommend you buy whatever unsweetened banana chips you can source from places that have a bulk bin – just read the ingredients first!

Edited to add – you can make these without the maple syrup, too! These cinnamon baked banana chips are simple to make and make a perfect snack for those who are nut-free or just craving some crunch!