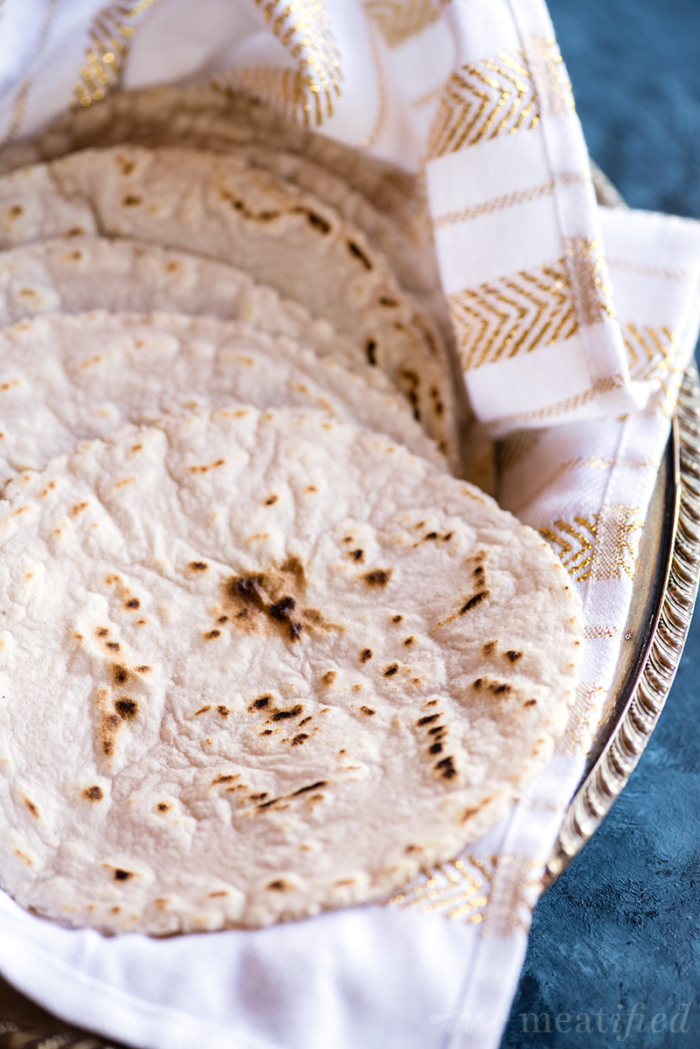 This recipe for foolproof grain free tortillas is brought to you by my deeply ingrained perfectionist tendencies. There are plenty of recipes out there for cassava flour tortillas, but I wanted to base my first foray into grain free flour territory on a simple, traditional recipe. You wouldn’t think that a recipe as simple as flour + fat + water would need much testing, but in reality I ended up making in excess of ten test batches. Yes, ten.

I did this because I frequently came across discussions about how cassava flour tortilla doughs were too dry or crumbly, which meant people were adding lots of extra water to existing recipes. And it was easy to see why! Although you’ll often see companies claim that cassava flour can be exchanged one for one for wheat flour in many recipes, I found it was really dry and ate up plenty of moisture. So after much tweaking and testing, I found that I had to add two thirds the amount of water again than the classic wheat based recipe I used as a starting point! I also had to increase the fat by about 50% to hit the sweet spot between soft & pliable and heavy & greasy.

Originally, my assumption was that more fat would be the answer to making pliable grain free tortillas, but I found that adding extra fat without balancing out the ratio of fat to water yielded a greasy feeling tortilla. They didn’t taste too bad, although they were visibly greasy to the touch, leaving oil behind on your hands when you picked them up. But the real kicker was that those fat-heavy tortillas didn’t survive storage and couldn’t reheat at all. Instead of crisping up, they just became progressively greasier and softer when you attempted to reheat them.

Instead of heat helping that crisping along, it released the fat from the dough, leaving behind an oily skillet and a tortilla that finally succumbed to limpness and inedibility. So understandably, I’m pretty proud of these humble looking grain free tortillas! I dubbed them “foolproof” since it’s such a simple recipe:

I’ve given you both sets of measurements for this recipe, American cups & volume measurements vs metric weights. If at all possible, I highly, highly recommend you use an inexpensive digital scale to measure your ingredients. I’m not saying that to sling some scales, although I won’t complain if you do go out and buy a set now.

(When I first moved to the States, I was utterly baffled by the concept of cups. These days I’m confident in using them, but… honestly, I still think the whole system of volume measurements is Spock-annoying level illogical.)

It’s just that weight is so much more accurate than volume measurements, which is so, so important when you’re working with flour of any kind. I have tested this out in my own kitchen: most tablespoon measures are a little short and each time you measure out oil, there’s always a little left behind in the spoon. This means that, cumulatively, each subsequent tablespoon you measure out compounds and furthers the error. As an example, when I measured out 6 tablespoons (90 ml) of avocado oil, the amount that made it into the bowl was 5 tablespoons (75 ml). That’s a whole tablespoon short, meaning my recipe was 17% short and I had no freaking idea.

So if you have a scale, pretty please use it, ok? Me and my comments section thank you in advance!

If you don’t have a scale, you’ll want to scoop and level off your flour with a knife to be most accurate. Measure out the oil as a half cup and then two tablespoons rather than 10 tablespoons in a row. That will minimize any inaccuracies as far as possible, but bear in mind that it’s just not going to be as precise as using a scale and may affect the outcome. 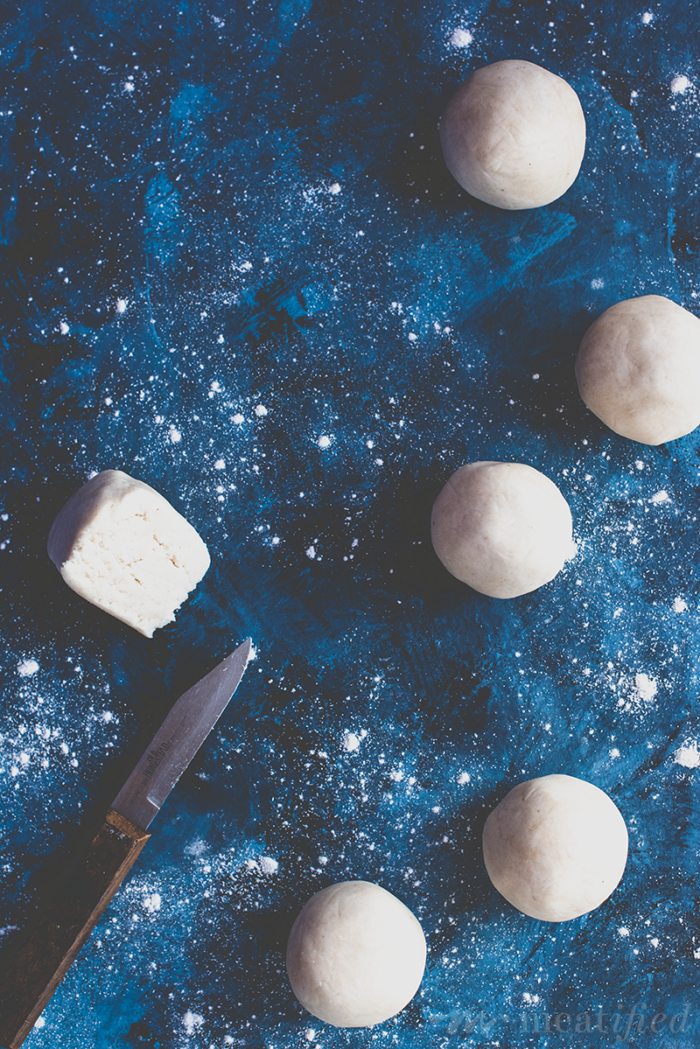 You’d think I’d be happy to stop recipe testing these grain free tortillas after batch number nine or so. But, nope. I wanted to find out if swapping out the oil or fat used in the dough would make any difference. So I’ve given you a choice of three different cooking fats as options here: avocado oil, pork lard and palm shortening.

All of them will work to create tasty grain free tortillas, but the choice you make will affect how the dough behaves and how it cooks, too. I’ve outlined the differences and my observations from many, many, maaaaaaany test batches below! (Did I mention that whole perfectionist thing? Yeesh). 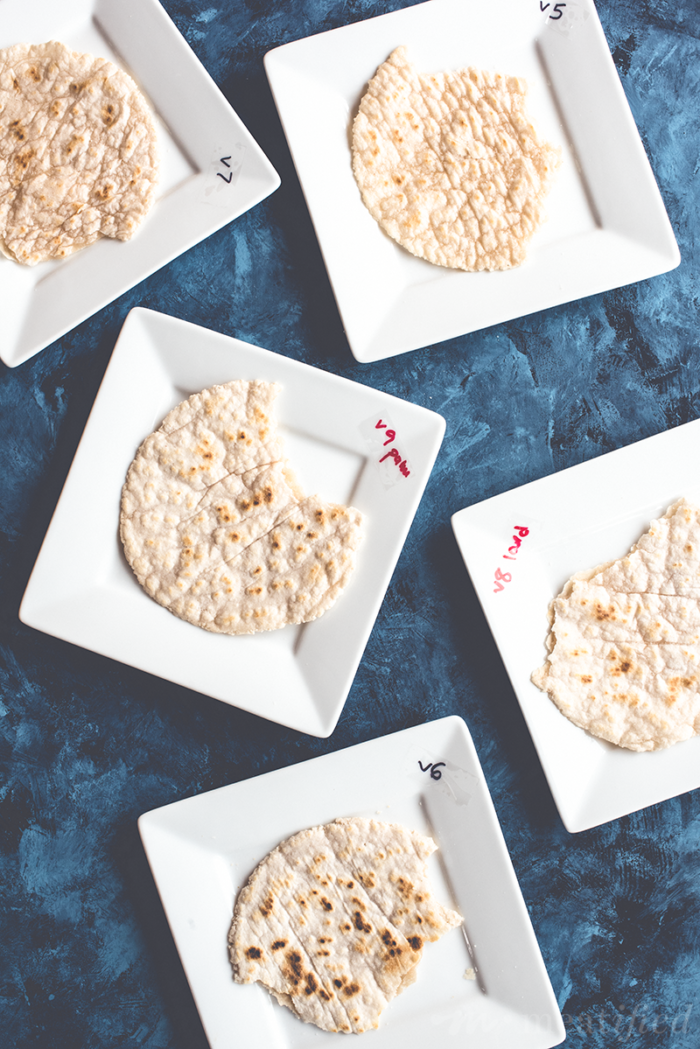 Summary: the easiest dough to work with, a little bland.

Summary: best flavor, but a little harder to work with.

Summary: wouldn’t use if another option were available. 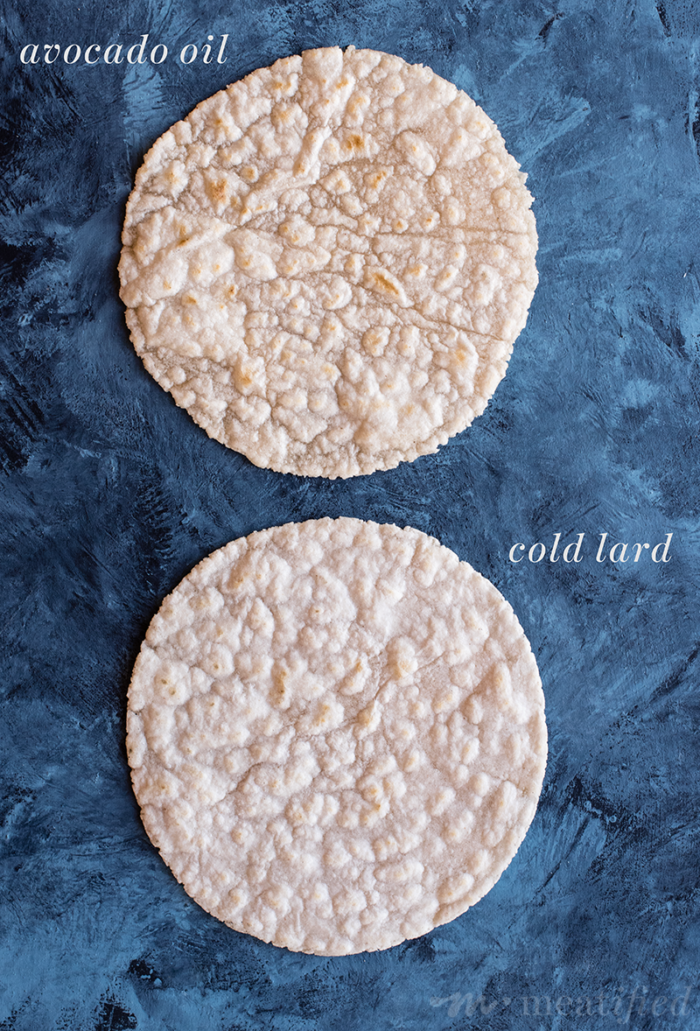 In terms of taste and texture, the lard wins out, hands down. It yields a grain free tortilla that is crispy on the outside and fluffier at its center. All three fats – pork lard, avocado oil and palm shortening – work but the feel and savory scent of the lard-based tortilla recipe set it apart. You’ll notice in this photo above that the avocado oil tortilla looks very slightly different. I’ve undercooked them both just a touch so that you can see the difference more clearly.

Although the lard dough is a little harder to work because it’s very slightly drier, I recommend you use lard for the best consistency, texture and taste. You can make your dough by hand if you like, working the fat into the flour in a bowl, then adding the water a little at a time to knead together a dough. I find the quickest and easiest way is to throw all the ingredients together in a food processor. This six tortilla sized batch actually works perfectly in my mini food processor, even though it doesn’t look like it will at first!

I measure all my ingredients straight into the bowl (with the blade covering the hole) using my digital scale, so it takes just seconds to bring the dough together. All you need to do is pulse the flour, fat and salt together, then pour in the water and blend to combine everything together. After that, it’s easy to tip the dough onto a clean surface (don’t add any flour!) and work it together into a smooth, pliable dough.

The easiest way to form these tortillas is to use, wait for it… a tortilla press. Usually, I’m pretty anti uni-taskers in the kitchen, but this thing is simply heaven sent if you want to make tortillas on the regular. You can roll them out by hand between two pieces of parchment paper, but frankly, that’s a complete pain in the… you get my point. Bonus points: a tortilla press makes it so much easier to make tostones, too. A little tip: when working with a lard based dough, the tortillas are more prone to crack at the edges. For a smooth, round tortilla shape, I find it best to press the dough more than once. First, I press the tortilla about half way into a three or four inch round. Then I use the curve of my fingers to press any rough, ragged edges into a smooth circle. Then I press the tortilla a second time to get a nice, evenly rounded shape with neat edges. Of course, all of that is just for the sake of appearances, so if you don’t mind a messier edge, you can just press ’em as normal, if you like.

Once the tortillas have been cooked quickly in a hot, dry skillet, I like to rest them on a clean cloth rather than putting them straight on a plate. This way, they won’t go soggy by sitting in their own steam as they cool slightly.

I have to say it: these are not your average grocery store tortillas. Just like the real thing, they are best enjoyed fresh, although you can reheat them gently in a dry skillet. You can store leftover tortillas in an airtight container or in a freezer bag, but be aware that they will soften in plastic and lose some of their texture. Stored tortillas will be more chewy and the flavor of the cassava flour will come through more strongly, too.

Once they are reheated, they are not as pliable as the original tortillas and are probably closer to a flatbread texture than a tortilla. Again, the lard tortillas fare the best being made ahead and reheated. Although I’ve tested this recipe over ten times, I used the same brand of cassava flour throughout. I can’t guarantee the results if you use a different cassava flour, since I’ve heard that other brands aren’t as finely ground or can be more gritty or chewy in texture. Adapted to be grain free from this Serious Eats recipe.

If you can, please consider using an inexpensive digital scale to measure your ingredients for this recipe. Volume measurements like tablespoons and cups can vary greatly, which is not ideal for any kind of bread or baking!

When working with a lard based dough, the tortillas are more prone to crack at the edges. For a smooth, round tortilla shape, I find it best to press the dough more than once. First, I press the tortilla about half way into a three or four inch round. Then I use the curve of my fingers to press any rough, ragged edges into a smooth circle. Then I press the tortilla a second time to get a nice, evenly rounded shape with neat edges.

You may also find it helpful to rotate the tortilla around 180 degrees before pressing a second time to get a more even thickness on the tortilla. The press tends to put more pressure on the side nearest the hinge, which can make that side slightly thinner.