I know it’s nowhere near pumpkin season, but I love the stuff year ’round! I wanted to whip up something to dunk our plantain chips into, but I was out of avocados. And, if I’m honest, fresh herbs. I need to go grocery shopping. Anyway! I always keep a few cans of pumpkin puree around because I use it quite often to thicken up soups. Instead, I took the creaminess of the puree and used it as a base for this Pumpkin Dip! Most people think of pumpkin as something that needs to be loaded up with sweetness, probably because most pumpkin recipes involve roasting… or baking. I went in the direction of savory flavors for this version of Pumpkin Dip, loading up on garlic and lemon. Since I wanted to keep the Pumpkin Dip compliant with the Autoimmune Protocol, I skipped the seed or nutshade-derived spices and instead opted for ginger and turmeric. I used my mini food processor to whizz everything together in seconds. You can process it until it’s smooth if you like, or leave it kind of chunky so it has a texture closer to hummus or bean dip – whichever you prefer! I sprinkled mine with a little kelp “salt” before serving, but that’s totally optional.

This recipe is suitable for both the Autoimmune Protocol and the Whole30.

This post is included in the AIP Recipe Roundup – go take a peek for some further AIP recipe inspiration! Makes approximately half a pint.

This recipe is suitable for both Autoimmune Paleo and the Whole30. 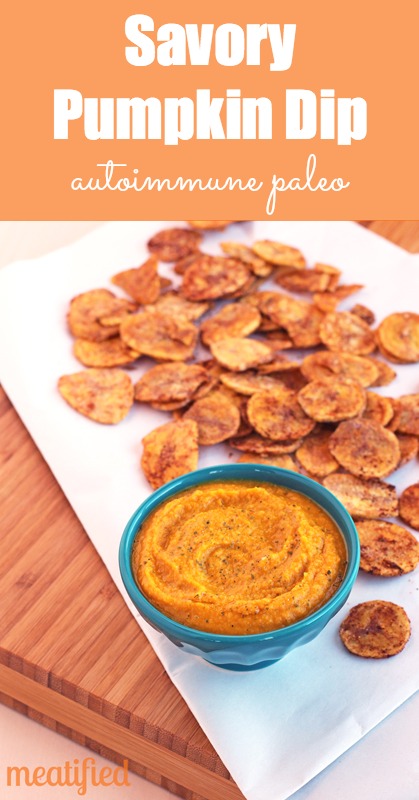