First of all, what on earth are pork shanks? The pork shank is a cross section of the leg bone taken from below the knee: they’re kind of the short rib of the pastured pork world! I first came across this cut called “Pork Wings” at a restaurant which served them BBQ-style, with the bone still in. I always buy them bone in now, both for the flavor and for the economical price. Like a good short rib, pork shanks should be slow cooked until the meat is tender enough that the bone comes out all at once, with no meat still attached to it. I usually oven braise them, which always turns out delicious.

Two of my favorite pork shank / wing recipes are here on the site: Coconut Milk & Five Spice Pork Wings and Braised Pork Wings with Apple Onion Gravy. This weekend, though, it was way too hot to have the oven running for hours, so I came up with this great slow cooker pork shank recipe for you instead! If you look at those older pork shank recipes, you’ll see that they can vary in size a LOT – those pork shanks were about 10 oz each, whereas the ones I used here were only about 5 oz. This recipe is one for the weekend because of how long it takes, but once the pork shanks have been browned and the onions softened, everything goes into the slow cooker for about 4 hours on high. I have made this recipe several times and always found that 4 hours on high followed by 30 – 60 minutes on low at the end turns out perfectly tender pork shanks. I am sure that you could also cook these entirely on low if you wanted, but have not tested that out myself because I so often forget to start the pork shanks early enough – please let me know if you do!

There is one extra step that I add at the end which I believe is well worth it: pureeing some of the vegetable mixture and meat juices together in a blender. I do this for a few reasons. I really enjoy a gravy or sauce along with the pork shanks instead of a more loose pot roast-style dish, but I really don’t want to mess around trying to reduce the braising liquid or adding thickeners. It also means that you don’t have to worry about trying to remove any excess fat which has cooked out of the pork in the slow cooker. By taking all of the cooking liquid, plus about half of the vegetables and blending them together, you emulsify the fats (removing any potential greasiness) AND create a lovely flavorful smooth sauce for the pork shanks to be smothered in. Win-win, if you ask me.

Once you have made your puree, pour it back into the slow cooker, stir everything together and then continue to cook on low for 30 – 60 minutes while you make sides and finish getting anything else you want ready to serve with the meal. I love to serve this over a fluffy mashed vegetable for extra comfort food points! 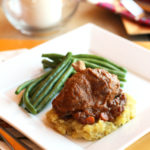 Pork shanks are the short rib of the pastured pig world! Use your slow cooker to make the most of this deliciously tender bone-in cut with minimal effort.