You don’t have to go to IKEA for these Swedish Meatballs! Truth be told, I’ve actually never eaten those Svenska köttbullar, but lucky for you that I have a Swedish friend who both provided and translated some original recipes for me to work from when I was writing The Paleo Healing Cookbook.

This is the recipe that I created for the cookbook after testing out more batches than I even care to think about. While the traditional 50:50 balance of beef and pork was pretty straightforward, I was worried that making a recipe that didn’t have the traditional breadcrumbs, milk, eggs and all spice would turn out to be nothing like the original. And that’s without even touching the cream sauce!

I’m sharing this recipe for Swedish Meatballs from The Paleo Healing Cookbook to celebrate its re-release in paperback! (Originally, it was available only as a hardcover edition, called Nourish: The Paleo Healing Cookbook). The paperback edition won’t become available until Tuesday November 28th, so I thought I would give those of you who don’t yet have a copy of either cookbook a sneak peek at one of my favorite recipes. 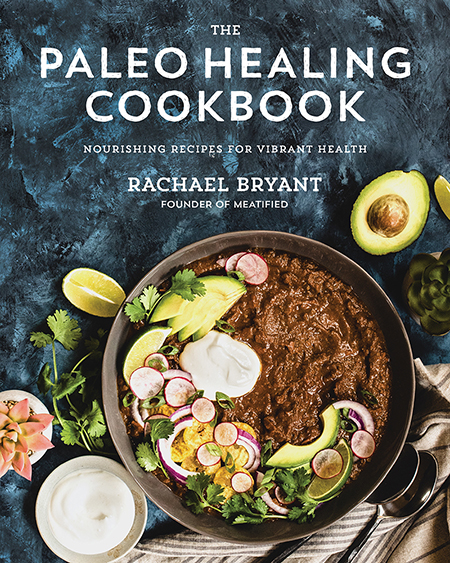 When I wrote the recipes that would go into and become The Paleo Healing Cookbook, they were developed for the oven or slow cooker. Since then, I – along with so many other people! – have come to use and love the Instant Pot, an electric pressure cooker that cuts down on cooking time dramatically and makes things a little simpler and quicker in the kitchen.

Since I always want to create recipes that are delicious, nourishing and as usable as possible, I’ve gone and converted 35 of the recipes in The Paleo Healing Cookbook so that they’re totally Instant Pot friendly. You’ll save a little time, but not lose out on any flavor.

As a “thank you” to everyone of you who has supported me over the years either by purchasing the hardcover Nourish or by pre ordering The Paleo Healing Cookbook, I’ve put all of those converted Instant Pot recipes into a completely FREE companion ebook, The Paleo Healing Cookbook: Instant Pot Recipes, that works in tandem with either form of my cookbook. You can grab your own copy here and take a peek at the recipe index below. In this post, I’m sharing both the original oven and stovetop recipe for these Swedish Meatballs AND the converted, Instant Pot friendly recipe for them that I created for The Paleo Healing Cookbook: Instant Pot Recipes. So you can try out whichever recipe method works best for you.

Now, back to the balls!

Yup, I wrote that. I’m a sucker for alliteration, what can I say? Now, as I was saying earlier, translation Swedish Meatballs into an AIP, allergy friendly recipe without any grains, gluten, dairy, eggs or seed spices sounded like a tall order at first. And that’s where my Swedish buddy really helped me out. Because when we went back and looked over some older, traditional recipes, I learned something new. That once upon a time the binder and filler used in Swedish Meatballs wasn’t milk soaded breadcrumbs, but potato. Yes, the humble spud had been holding meaty balls together without fanfare.

That was the inspiration I needed to approach Swedish Meatballs a little differently. In place of the potato, I started experimenting with white sweet potato. What I found was that a little puree of sweet potato, broth and gelatin would hold the meatballs together, keep them super tender and give a lovely smooth gravy. You might pull a face at the method I’ve described below, but it’s totally worth it, because it creates the perfect, light and tender Swedish Meatballs that hold together well and yet almost melt in your mouth. Paired with creamy gravy and piled over some whipped white sweet potatoes, you’ve got the ultimate cold weather comfort food.

All spice is the traditional seasoning that gives Swedish Meatballs their distinctive, savory-yet-unusual flavor, but to keep these bad boys AIP friendly, I swapped in some ground mace and it works beautifully!

Lastly, there is a little coconut milk added to the gravy for creaminess, but I’ve also given you alternatives to keep the recipe coconut free if you need to. Either way, your tummy will be happy. I served these Swedish Meatballs on top of swirly Whipped Sweet Potatoes with Parsnips & Rosemary from The Paleo Healing Cookbook, but you could also try my Herbed Whipped Parsnips from the blog. In the book, the Swedish Meatball Plate menu uses the Cherry Thyme Sauce, but at this time of year it seemed pretty criminal not to use cranberries, so the photos show the Cranberry Sauce with Blood Orange, Balsamic & Rosemary from the blog.

With just a few tweaks, you can make these Swedish Meatballs and luscious gravy in the Instant Pot! Don’t believe me? It’s one of my favorite recipes from my companion ebook, The Paleo Healing Cookbook: Instant Pot Recipes!

At first, I was concerned that meatballs would come out far too dense and puck-like, to the point that I almost didn’t try this recipe out at all in the Instant Pot. But what I did find is that keeping the cook time as short as possible, along with allowing the meatballs to rest inside the Instant Pot before releasing the pressure gave a lovely tender meatball that didn’t disintegrate as I had feared.

The other bonus of the Instant Pot method? You’re only messing up one pan, so to speak. The meatballs and gravy base cook together, then the meatballs take a little rest while you finish up the gravy right there in the Instant Pot, too. Don’t forget to pick up your FREE Instant Pot companion ebook if you own Nourish or have pre ordered your copy of my paperback, The Paleo Healing Cookbook!

This post was included in the Paleo AIP Recipe Roundtable.

Baked Swedish Meatballs in Gravy from The Paleo Healing Cookbook

You can sub chicken broth for the beef broth, if you like.

Not crazy about coconut? Omit the coconut milk, add an extra 2 tablespoons (30 ml) of broth and an extra ¼ cup (60 g) of baked sweet potato to the blender.

While the combination of beef and pork is classic – and a little more tender – these taste pretty darn good made with just ground beef.