I gave Mr Meatified some test pieces of this paleo chocolate bark and the first words out of his mouth were, “damn, woman!”. Politically correct? Not so much. But he is right in that this no dairy or soy chocolate bark is freaking delicious. The best thing about this chocolate bark isn’t that it’s soy and dairy free – although, let’s face it, that’s pretty darn awesome. It’s that it’s got a super satisfying CRUNCH to it from the unsweetened banana chips. On their own, unsweetened banana chips are pretty bland and strangely un-banana-flavored. I’m sure that should be a word. So if you’re looking for an overwhelming banana flavor, it’s not here. The unsweetened banana chips DO, however, give an amazing texture. They make this paleo chocolate bark taste like a chocolate bar that’s studded with crispy roasted nuts – except, without the nuts. Which means that nut-avoiders of all kinds may want to hug me. Especially when they realize that this paleo chocolate bark is swirled with tahini, which gives it a rich, nutty flavor to boot. Again, without actually eating nuts. WOOOOOT. 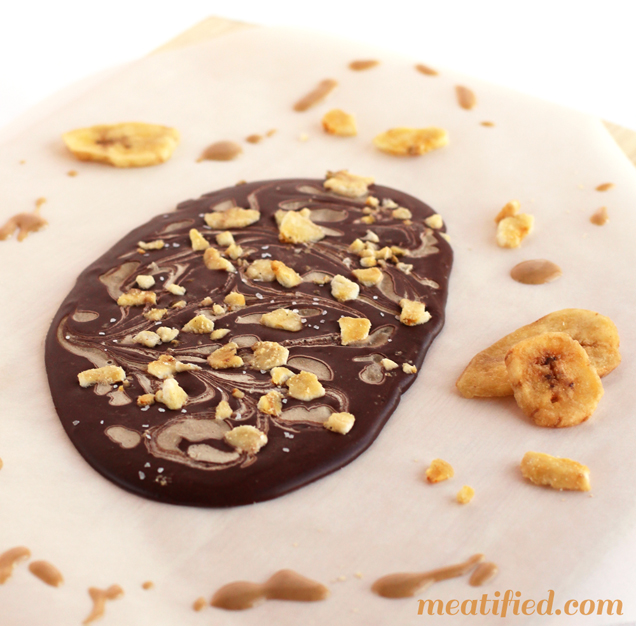 There is – as always! – a slight catch with this recipe. Aside from the fact that you’ll want to eat ALL OF IT. And that is that it’s not so stable at anywhere near room temperature. Because it’s coconut oil based, you are going to have to store this paleo chocolate bark in the fridge or freezer.  Which isn’t a big deal, but does mean that this paleo chocolate bark really isn’t suitable for gift giving. I mean, I have no idea why you would want to give this stuff away (you’re crazy!) but since the holiday season is approaching, I thought it only fair that I warn you about the whole melting thing. But don’t worry! Soon I’m going to have a recipe for you that shows you how to make your own fully Paleo (and fully room temperature stable) chocolate! So you’ll be able to satisfy both your cravings and your gift-giving tendencies all at once! Without going broke buying stock in Enjoy Life chocolate chips! Yay! Want to eat chocolate without all of the nasties in commercial brands? Here’s how to make a delicious Paleo chocolate bark that’s soy & dairy free!